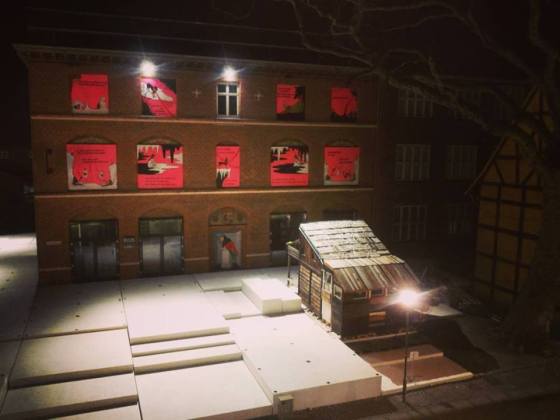 It seems crazy, I know…

Our little house is now standing in front of KØS museum in Køge! It’s hard to believe also for us.

The big things are already done, last details and it will be ready to be lived again!

The exhibition info here:  In your heart and in your city at KØS.

As all of you’ve already known, last year we could save our house from the destruction of the eviction.
Yuki is taking part to a great group exhibition in Denmark, at KØS – museum of art in public space, and we have the great possibility to show Discuvry project as well.

So in one week we are going to move our little house to Køge!

The exhibition  In your heart and in your city presents a range of brand-new works of four Japanese contemporary artists – Chiharu Shiota, Yukihiro Taguchi, Takafumi Hara and Tatsumi Orimoto. Being one of the most comprehensive and ambitious projects ever presented at the museum, the exhibition takes place both outdoors in the public space in front of the museum as well as inside on two floors. ‘In your heart and in your city’ will be a great opportunity for the Danish public to get an insight into Japanese contemporary art and culture.

We wait for you!

Tomorrow there is the opening of Yukihiro’s exhibition “Kettenreaktion”: stop-motion, video works and installations by Yukihiro Taguchi.

It will be showed the complete Discuvry work as well.

At 20:00 there will be an amazing live Sound Performance by Mieko Suzuki (Kookoo).

You can not miss it!

Finally it’s online a short version of the documentation of this two years spent in Cuvry.
It is a stop motion video realized by Yukihiro Taguchi.

In the video you can see all the evolution of the camp, from a empty field to a crazy village, the eviction in the end and how we could bring away our house.

As many of you have already known, FreeCuvry is evicted.

The eviction process started on Thursday 18th September, when in the night (at about 21.00) a big fire burned some houses just in front of our home.

The cause of the fire are still unclear, in the beginning we thought it was made by some people from the camp, because of some inside fighting, but in the end Cuvry’s people were sure it was not realize from somebody who lived in the camp.

There were many theories, from the neo-nazi to an organized tactics to evict Cuvry. Just one things is sure: the police was too fast and ready to kick everybody out of the camp, with the excuse of investigating for the fire, and they didn’t let anybody to get in anymore.

The weekend after the fire we could go inside just shortly to take our stuff from the houses.

On Monday 22nd September the bulldozers started to destroy all the houses of FreeCuvry.

Nobody of us thought that destroying FreeCuvy would have be so fast, so easy…too easy.

We would have realized a project this month in Cuvry, with the theater Hebbel am Ufer in Berlin.

Our plan was to start exactly from the weekend after the fire to organize events and art performance in Cuvry. But we couldn’t even start.

Thanks to this project with HAU and to the help of our friend and art curator Lutz Henke, we managed to have the authorization to save our house as art piece. We had two days of time to enter in the destroyed Cuvry, between the working bulldozers, cut our house in pieces and bring it away.

Thanks a lot to Raul Walch, Masaru Iwai, Rikiya Yamakawa, Nill, David and the other friends who worked with us in these two crazy day to save our house!

from the 2nd October to the 12th October we will do some art actions in some public space in the city (please check the website of the theater to know where we will be day by day);

from the 13th October until the 26th October, in front of the HAU2 avenue we will create an installation with the house and show all our documentation and our work realized since when we arrived in FreeCuvry – almost two years ago – till today, included the days of the eviction.

FreeCuvry was a unique reality in Berlin, a mirror on the society that surround us.

It was amazing, beatiful, crazy, cruel.

It was damn real.

And another time the story of the eviction today was a false alarm.

But for this yesterday there was in FreeCuvry a reunion to discuss the future of the camp and how to react when the police will arrive.

Mostly of the people there were activists and journalists. Somebody told that the owner Artur Süsskind would have been come today to speak with the inhabitants of FreeCuvry….mmmmm….

I don’t know if a billionaire would do it….we will see.

Yesterday I also spoke another time with some journalists, this time from VICE, although I promised myself I would have done it anymore.

I don’t trust media and journalists, no more. I spoke with lot of them in the last time, because FreeCuvry is now a hip topic for the media. I thought I could make them speak about another side of Cuvry, that made by people who still believe that something good can born here, little by little. But what they wrote it was almost just what everybody can say just staying here one hour, and what you can see with a so superficial gaze is not a paradise, for sure.

We will not speak with journalists anymore.

We had no experience before in managing with press and media, but what I saw in this time in Berlin is just a bunch of stuff of poor quality.

This is the information today.

Do you still trust what is wrote in the newspapers? What I read till now are just bullshits.

It seems like our project arrived to the end.

Now it not just noise, the voice that this week police will came to evict the camp are real and concrete: tomorrow the parking around FreeCuvry is already reserved for police’s cars.

It continues the calling of supporters for FreeCuvry, who want to stay here, camp or whatever, to avoid the eviction. Most current infos can be found in the FreeCuvry Facebook.
We will stay here tonight and next day, hoping to manage to documenting everything till the end.

This evening in Cuvry there will be a reunion, at 18.00 on the river.

Tonight we will make a fire at our house, eat and stay together.

You are invite to join us to say “Sayonara Discuvry”.

Yesterday, when I came back to the camp, I found firefighters and police at the entrance: one of the houses on the big way burned.

Nobody was inside and nobody no one was injured. The fire in the camp is not something new, as everybody know also last summer the big teepee near the river burned, but this time everybody is sure, it was not to do something again somebody and it was not because some fighting inside the camp…well it happened.

But the good thing it was seeing the people of FreeCuvry to collaborate together to save what they could, even the gipsies helped. Maybe it was the first time were we felt to be a community. Of course we would have preferred to discover this sense of community in another way…

Anyway there is no big fire that can stop us now! The preparations for the CUVRYNALE continue!

Today we will continue to clean the camp.

Everybody is welcome in FreeCuvry!

Today we are still here

the refugees on the roof of the school

And for today FreeCuvry is save from an eviction.

Without police in the camp we were free to clean and order, starting from the library. After some hours of work we managed to put all the garbage in blue bags that we will kindly give to the city like a present, if the administration will be so kind to come and take them every morning in the corner of the street.

While we were cleaning we found all kind of stuff, even a vacuum cleaner! And don’t tell me that it was of FreeCuvry’s people! Nobody will trust you, since in Cuvry nobody knows what to do with a vacuum, unless someone has the power to generate electricity…

Today also a crew from the rbb TV came in FreeCuvry to make a reportage, that we didn’t watch because we don’t have TV (for the same reason we don’t have a vacuum). I just hope they didn’t make another bad report because we really don’t need it anymore.

Meanwhile the eviction of the Gerhart-Hauptmann-Schule in Kreuzberg. We were there half an hour before and there was the demonstration with music and lot of people were screaming “Freedom!” and supporting the refugees.
Do not give up!

I hope when it will arrive this day for FreeCuvry the people from outside will support us too, but I hope it is a very far day.

At least it will be not tomorrow. 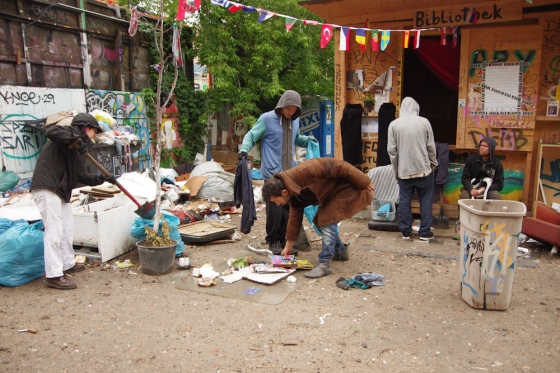 The attention on FreeCuvry from media and newspapers continues in these days.

Just yesterday we spoke with two journalist who will write in the next days articles about Cuvry; one was from Tip Berlin (the article will publish on the 3rd July) and the other one from Zeit Online.

Just 15 minutes ago I spoke with a journalist from the Tagesspiegel, he was in the camp waiting for a scoop about the eviction, because he heard voices about a possible evacuation today…I’m sorry for the lost scoop, but it seems like this will not happen today, the police is too busy with the Gerhart-Hauptmann-School, occupied by the refuges.
Two eviction in one day? Too much for Berlin, isn’t it?

So we stay still here today.

I will never be tired to say “Everybody is welcome to visit us!”

We need you to come here to see with your eyes what is really FreeCuvry.