Hello Køge, we are back!

Here we are! Again in Køge and this time we will live here for 4 weeks, yes!

Of course in our little house, re-built in the square in front of KØS Museum, in occasion of the current exhibition “In your heart – In your city”.

We continue the Discuvry project, mixing our daily life with art works.

Work in progress: a terrace-urban-garden beside our house with some japanese vegetable and flowers, we built the pots with reclaimed wood found in the streets of Køge

We are here every day until the 19th June and we will make two house-party on the 9th and 18th June. So if you are in Denmark by chance, come to visit us!

You will find more news about the events in the Museum’s Facebook page. 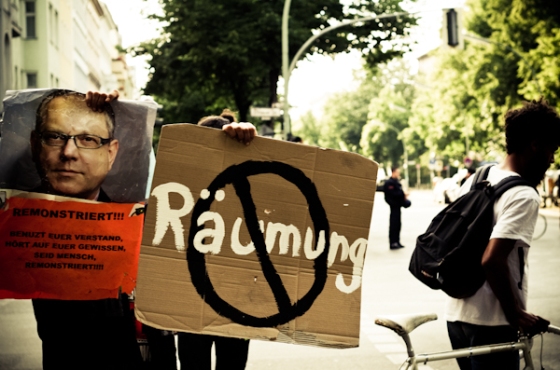 Today there was the demonstration for supporting FreeCuvry, the Gerhart-Hauptmann-Schule and against their eviction.

It was very peaceful moment, people united to defend the free use of the space and the right to have a place for living.

Come tomorrow for the party in FreeCuvry, make music, art and use all the free space like you want.

Free space to create your world!

And again and again voices about eviction. This time someone heard the police saying they want to evict us this weekend.

The plan for the next days and the infos about FreeCuvry eviction can be find here: FREECUVRY AGAINST EVICTION.

Tomorrow in FreeCuvry is SUMMER OF LOVE!!!

Come and bring with you instruments, colors and gooooooood mood!

Free jam session with you instruments and whatever you can find in FreeCuvry and can be played :)!

We wait for you!

Ps. Tomorrow cause the party against eviction there will be no market. It will be again next saturday, if we are still here.

We continue every day to work at the camp, cleaning and preparing the earth and the spirits to the CUVRYNALE.

After cleaning the entrance and the library (some blue bags are still there, we carry them outside little by little, unless some artists have a good idea about a big installation with blue garbage bags…), we are now cleaning the space in front the “gipsies’ way”. The idea today was to create a football field.

It was very nice to have been helped by the gipsy children today, although my rake is gone…but ok, we will not stop for such a little thing.

Maybe there is still hope to achieve a balance in this multicultural anarchic village.

The calling for everyone wants to participate to the CUVRYNALE is always open.

We are waiting for people of good will and creativity! 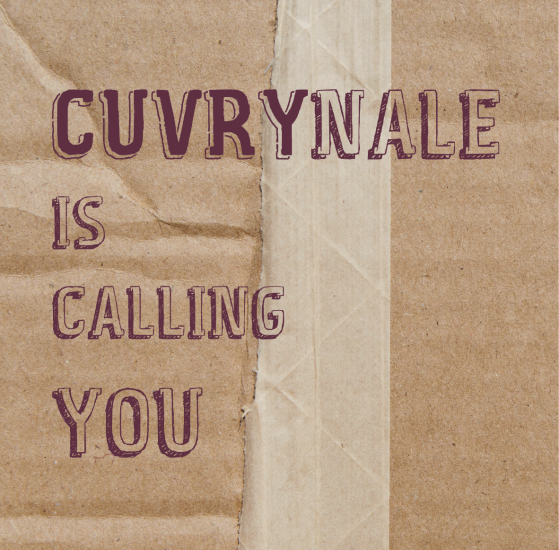 Today there was a meeting in FreeCuvry where we spoke about the louder and louder voices about eviction.

Soooooooo we decide that it’s really time to do something big and good in FreeCuvry.

The FreeCuvry summer festival. We will clean the camp, organize workshops, exhibitions, concerts…but we need you too!

It’s open the calling for all the artists, musician, jugglers, acrobats, clowns and people with good humor and desire to create something beautiful: come in FreeCuvry and do it!

Everybody is welcome. We are just waiting for you!

Eviction or not eviction: that is the question.

While nobody knows this so feared date, we can not stay without doing anything. Rather we are more stimulated to do something creative and good for FreeCuvry.

We will sell all the chairs, tables, pots for plants and whatever we realized in this time working here in FreeCuvry and you could also enjoy a tea or coffee at our terrace surrounded by green.

As you know (or you imagine) we don’t have electricity here, so everything we create here is created using just hand-saw, hammer and nails. A little bit old style? But this is what makes our work so special.

If you don’t believe me, come here and see with your own eyes!

In these days the attention on FreeCuvry increases, Cuvry Brache for the medias and the city.

Just 3 days ago a not so nice article was published on the supposed “left newspaper” Taz (so they define themselves).

In the camp there are some voices about an imminent demolition, probably in this month, but still we have not any official news. I don’t know how this kind of problem works exactly in Germany, but I suppose they will give has an advice before arrive with the bulldozers to kick all of us out of the field, I suppose they will give us the time to take and move our stuff…I don’t know.

FreeCuvry is a private field and illegal occupation, but the city allowed us to stay there and built our houses till now, no police came inside to say us we were not allowed, and they saw us building, they have never said one word.

So maybe for the law they can just arrive and kick us out, but I can not believe Berlin’s people will allow a so brutal evacuation.

But there is a positive side of all this attention on FreeCuvry.

Some days ago one woman came in the camp, she work in theater and she asked us if she could do a big theatrical performance in August, using all the space in the camp, from the river to the houses.

So also two musicians came later, they were from Netherlands and they would have liked to organize a big concert (with about 35 musicians) in FreeCuvry in the end of August.

We answered to both that it will be a pleasure for us have cultural events in FreeCuvry.

So we will see what will happen this summer, if we will still be here. 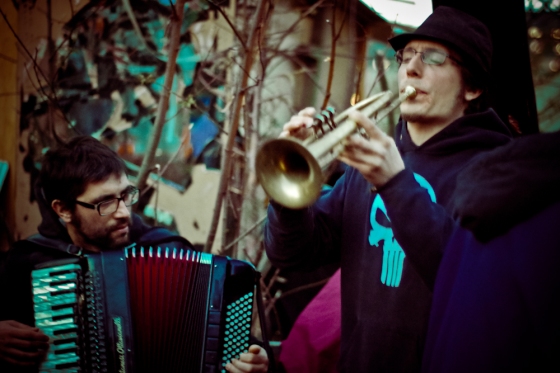 Because of the rain yesterday and today we couldn’t do any activities at the Discuvry space in front of HAU2, neither cooking or printing with woodcut. We are very sorry, but being an open-air space the Berlin summer rain it is a problem. Yesterday we tried to set up the blue sheet to cover the space from the rain like the last time, but this time there was a storm, the wind and rain were too strong. So we had to close everything again. But it’s ok, this is Berlin.

Tomorrow we would like to celebrate the last day of the Japan Syndrome festival, hoping it will be a sunny day 🙂 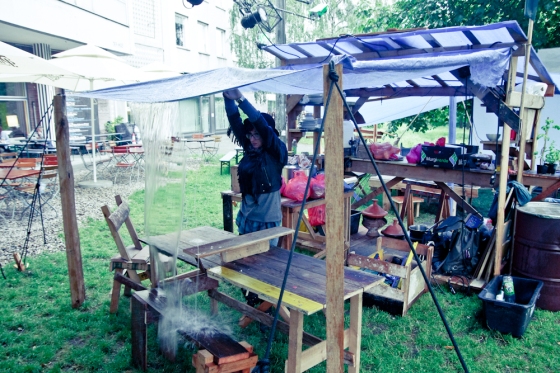 Thanks to all the people who visited us for the Open House event in our house in FreeCuvry.

It was such a special atmosphere of sociality and positive energy. 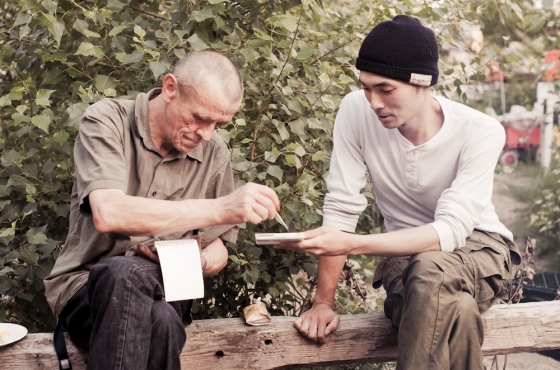 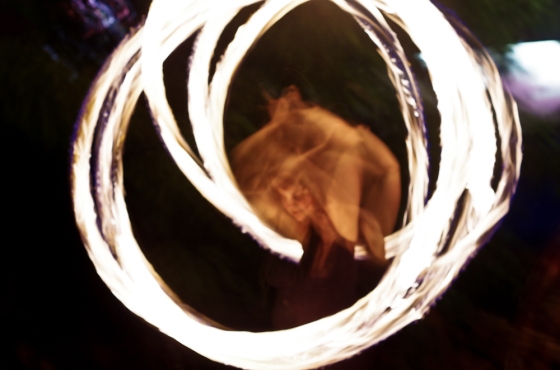 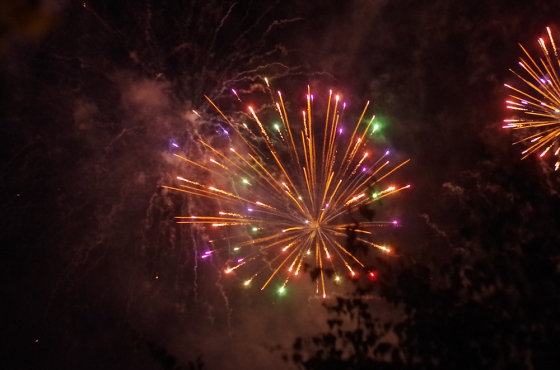 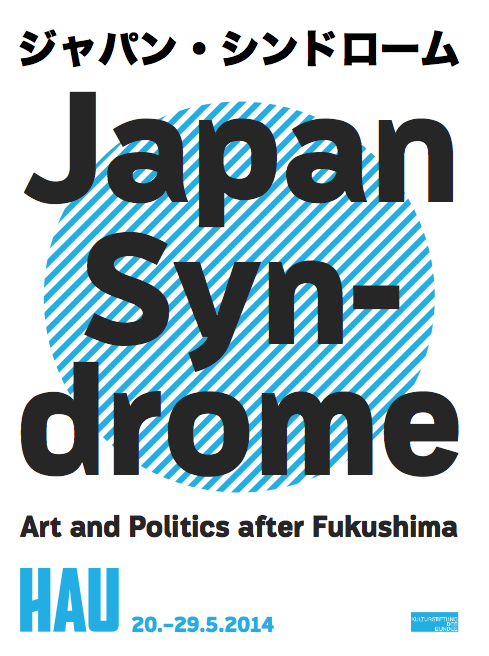 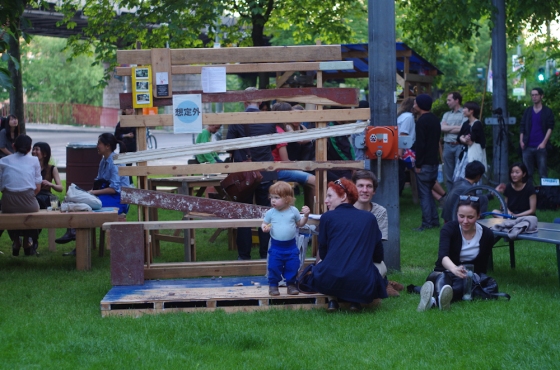 Discuvry is taking part to the festival Japan Syndrome, organized by Hebbel Am Ufer from the 20th to the 29th May.

Yuki and me have created an installation in front the HAU2. The idea is a open-air living room/kitchen where the people can meet and speak, about Fukushima, eat together, creating a connection with Cuvry. Everything is realized with the same concept of Discuvry project, with all material recovered all around the city and without using electricity.

We will be in front of the HAU2 every day until the 29th, cooking, continuing to build little things, furniture or something like that. You can visit us and build something, make woodcut on the tables or cook as well.

In particular tomorrow, 24th May, there will be the Open House party at our home in FreeCuvry from 15.00.

You are welcome to visit us every day, it will be a great pleasure. 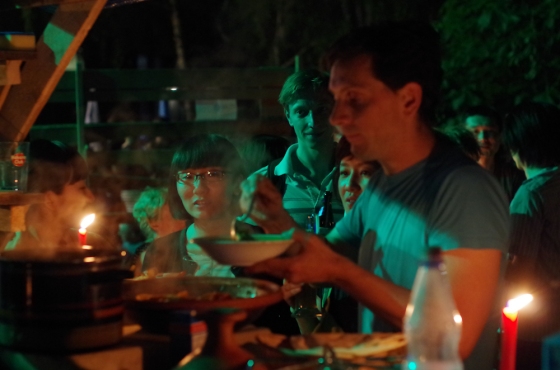 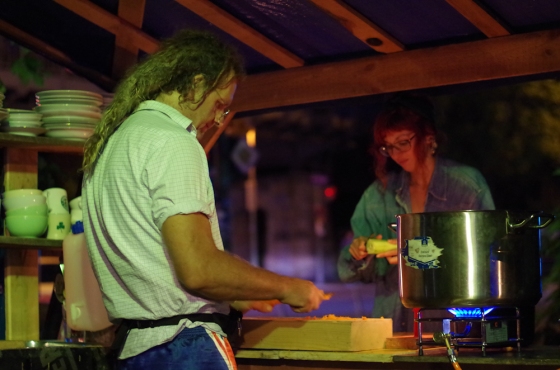