We would like to thanks all the people who came, helped and enjoyed our work at the Japan Syndrome festival, a special thanks to the HAU staff, Annemie, Jana and Benny, to our friends who have come and help us with the cooking, Kanta, Sasha and Sandy. Thursday was the last evening and we were very happy to have so much people around us, I cooked lentil soup, two big pots and it was everything eaten 🙂 it was very nice having our neighbors from FreeCuvry as well.

I would to like to write today about a component of FreeCuvry a little bit problematic: the gipsies.

I say problematic for one main reason, because they are a really close community and since they have been in Cuvry a real and clear dialog has been almost impossible, also because they speak just bulgarian or romenian and a little part of them spanish. Anyway, the language would be not a insuperable problem if a person wanted really communicate.

They arrived in Cuvry the first time this winter, they were just a little family and they build two little houses. But during the winter they had bid discussion with the Poles, mainly for some thefts inside the camps, so during the winter there was the “gipsy war”, and their houses were destroyed more times.

In spring they came back, this time more numerous and stronger, and more conscientious and prudent, they spoke with the habitants and said they would have not stolen inside the camp and behaved good. So they started to build their house, at first one, then two, then five, then in just two weeks they built 15 houses. They completely destroyed the Pagoda, the construction for common uses near the beach, to steal all the material for building their houses. It’s very difficult to speak with them and explain that FreeCuvry is not a gipsy camp, there must be a balance and they can not build everywhere without speaking with the neighbors. They are very fast to build, and they always use the excuse of the children for their need of more and more space, more and more houses. Now a day in FreeCuvry there are about 50 houses (I say “about” because almost everyday there is a new construction) and 20 of them are gipsies’ houses.

We made a reunion to speak all together about this topic, we invited the gipsies to partecipate…there was nobody of them.

I asked to the Bulgarians to not build a house in the Pagoda place, because we wanted to build it again…the day after there was already a construction.

I don’t know how will be, continuing in this way FreeCuvry will be really a gipsy camp. We can not stop them, they are very cohesive and they live in this way since generations. But maybe we can create a canal to communicate with them and working together.

The Pagoda ruins in March

The Pagoda ruins in March 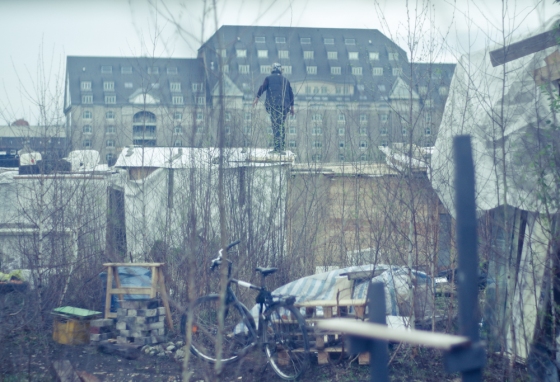 The gipsies started to build in March

A view of the gipsy street behind the big teepee